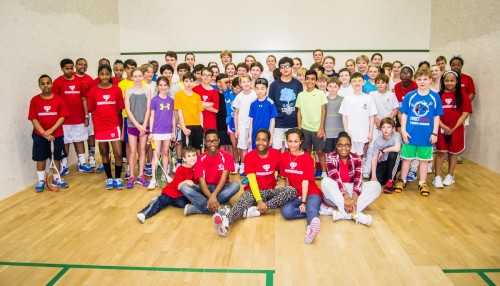 The StreetSquash Jr. Cup was a huge success! The day kicked off bright and early as the middle school squash players were bustling about the building, accompanied by their enthusiastic parents. George took the court promptly at 9 am to welcome the participants and their families to the fifth annual fundraiser which supports our P.E for Public Schools Program. We had 8 teams compete in the middle school round with Ariana ’21, Alveann ’21, Brandon ’21, Jaylen ’20, Geraldo ’19, Trina ’19, Marvyn ’19, Suejona ’19, Kendra ’20, and Nick ’20 participating on each of the teams. The middle school round concluded at noon, with Dalton’s “The Tiger Squad” reigning supreme.

After a brief break for some lunch and vitamin D intake, the high school round began at 1 pm with 5 teams competing for the Jr. Cup title. Samia ’17, Bryttany ’17, Kionne ’17, Kenny ’15, Luke ’18, Kyrell ’16, Jahresse ’18, and Richard ’17 were all outstanding assets to the teams, representing StreetSquash with talent and pride. The afternoon concluded with Sat’s “Team Squash-Fit” taking home the victory, and with all participants leaving with a great sense of accomplishment for their fundraising efforts!

Highlights:
-Exceeding our fundraising goal of $50k, and ending the afternoon with a whopping total of $55,000!!
-Our high schoolers showing up at 8:30 am on a Sunday to work the middle school portion of the event with limited complaints
-The custom made jerseys that added extra pizzazz to the afternoon