A Busy Month of Squash Competition

Throughout the month of November, StreetSquashers traveled near and far to compete in various squash tournaments. Our students have been working hard to hone their squash skills during practice, and we always look forward to match-play opportunities to see how much we’ve learned.

We weren’t short on squash competitions in November. Over the course of just a few weeks, our teams traveled to Howe Cup, the Heights Casino Bronze Tournament, the Trinity Team Invitational, and the 2019 New York Regional Junior Championships – read more about each tournament below!

Tournament highlight: Our female staffers, participants, and alumni coming together for an entire weekend of sport, bonding, and fun! 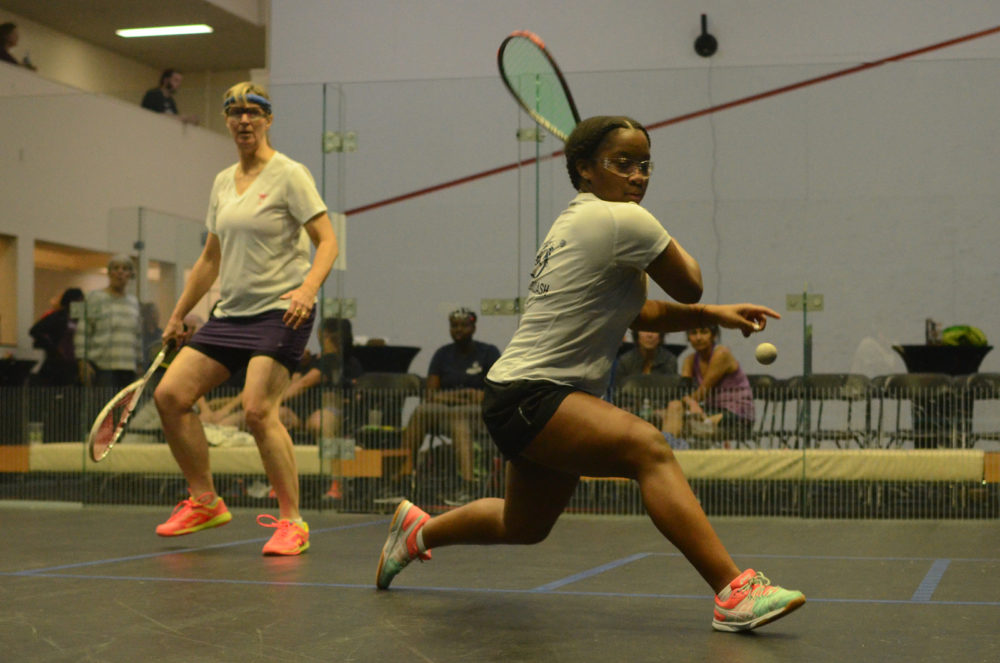 Over the weekend of November 15-17, seven participants, four alumni, and five staff from Harlem and Newark traveled across the country to Seattle, Washington to compete in Howe Cup. The annual tournament is the largest women-only squash event in the nation. In a long-standing StreetSquash tradition, our female students, staff, and alumni competed alongside one another in the tournament’s team-based format.

Our players joined five different teams across the event, with one team – Don’t Stop BALLieving – taking home the title at the end of the weekend! After three days of exciting competition, our teams left the courts with many hard-fought wins, close loses, and tons of experience and memories gained.

Between matches, everyone had time to explore Seattle, including a ride on the city’s famous ferris wheel. The group also enjoying cooking meals at the team’s hotel, yoga, Howe Cup’s annual dinner party, coaching younger players, and more.

“When I was a participant in StreetSquash, there were fewer chances to watch women – let alone older women – play squash. I’m happy to have been a part of an event that allowed our younger female student athletes to experience this all-women tournament.” – Jazmin Matos, College Success and Alumni Support Coordinator

Tournament highlight: Ixayana, Class of 2022, winning the Girls Under 17 Division! 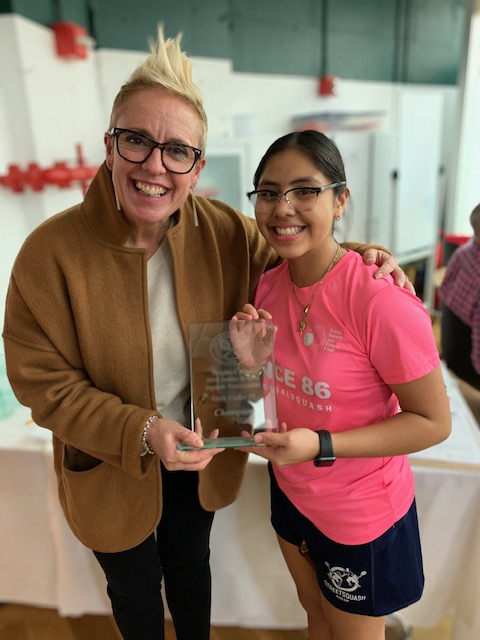 Ixayana, Class of 2022, poses alongside Linda Elriani, Director of Squash at The Heights Casino, after winning the 2019 GU17 Division.

On November 19th, six StreetSquash participants and Simba Muhwati, The Squash Academy Director, attended the Heights Casino Bronze tournament, representing in the Girls Under 13, 15, and 17 Divisions.

The tournament was hosted at The Heights Casino, a prestigious squash club in New York. Overall, the tournament was a great opportunity to expose our participants to the larger US Squash network, and a chance to play against new opponents outside of the SEA family.

Tournament highlight: All participants finding teammates to record their matches so they could review the film after the tournament – an idea thought up by Gus, Class of 2024.

On November 16th, participants and staff from both Harlem and Newark attended the Trinity Team Invitational, an annual tournament hosted by Trinity College and SEA member program, Capitol Squash, in Hartford, Connecticut. Our teams were also joined by former StreetSquash Senior Squash Director, Edgardo, who now works at SEA!

The Harlem A Team opened against the home favorites, Capitol Squash. The student-athletes lost a close match, but put up an admirable fight. The team rebounded nicely and scored a tough win against SquashBusters, followed by a loss to Squash Haven – a rematch from 2018 Regionals.

The Harlem B Team lost a first-match thriller to SquashBusters, but ended on a high note with two victories against Capitol Squash and StreetSquash Newark. 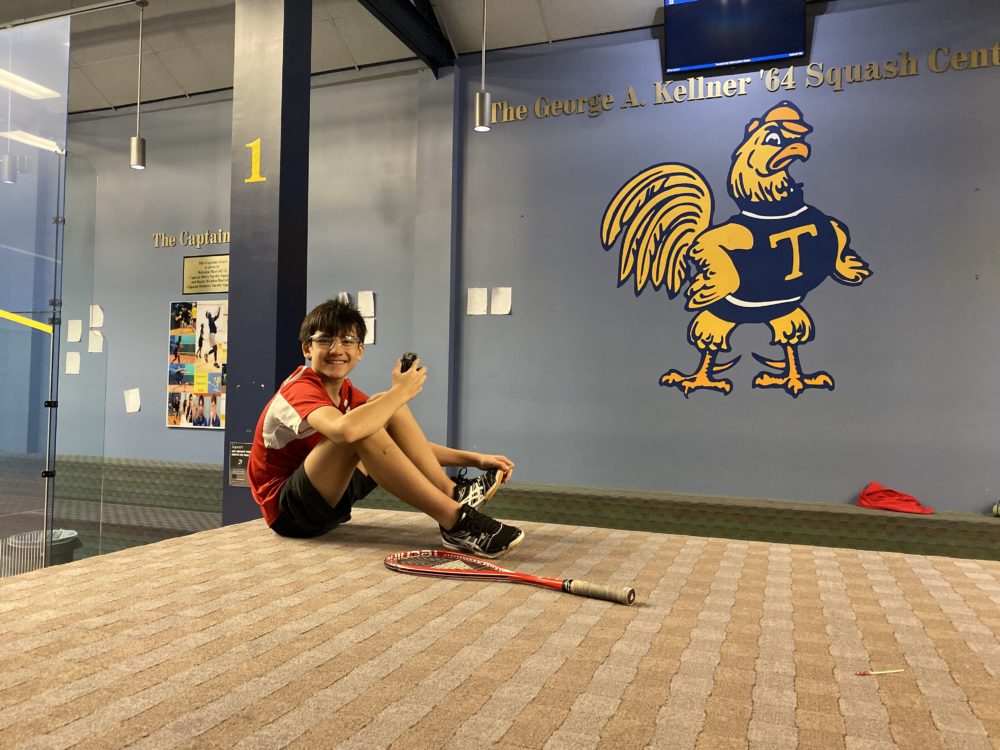 Gus, Class of 2024, reviews match footage after a competitive day on the courts.

The Newark players started off strong with a close 3-2 victory, then lost their final two matches of the day against SquashBusters and StreetSquash Harlem. Despite the scorelines, the matches were super close! The Newark team also brought one extra student, who had the unique opportunity to sub in and play for SquashBusters. In an especially exciting moment, Naomi, Class of 2025, and Shearnise, Class of 2026, earned their first-ever match wins, showcasing superb on-court focus.

Throughout the tournament, our participants had time to catch up with friends across SEA and watch a ton of squash. During the matches, the students celebrated one another’s skills and hard work, and even learned some new things about themselves.

Tournament highlight: Matthew, Class of 2022, coaching younger participants and showing them the ropes!

The first round of matches on Friday proved challenging for our boys, but the players walked away with valuable new experiences and lots of motivation for the rest of the weekend. Saturday, Promise, Class of 2021, lost a very competitive match 3-0. Later on, StreetSquash scored its first win with a 3-0 victory from Matthew, Class of 2022, followed by a heartwarming match-up between two StreetSquashers, Osiris and Brandon, Class of 2025 – after their match, the boys talked game strategy and court feedback while reffing for other players.

To wrap up the weekend, two StreetSquashers faced off again, with Nicholas, Class of 2020, snagging his first-ever victory against Naheem, Class of 2020.

Overall, the 2019 New York Regional Junior Championships were a big success, highlighted by a group of participants who were extremely supportive of one another. All of our student-athletes watched each others’ matches, cheered each other on, and made sure no one felt left out all weekend long. 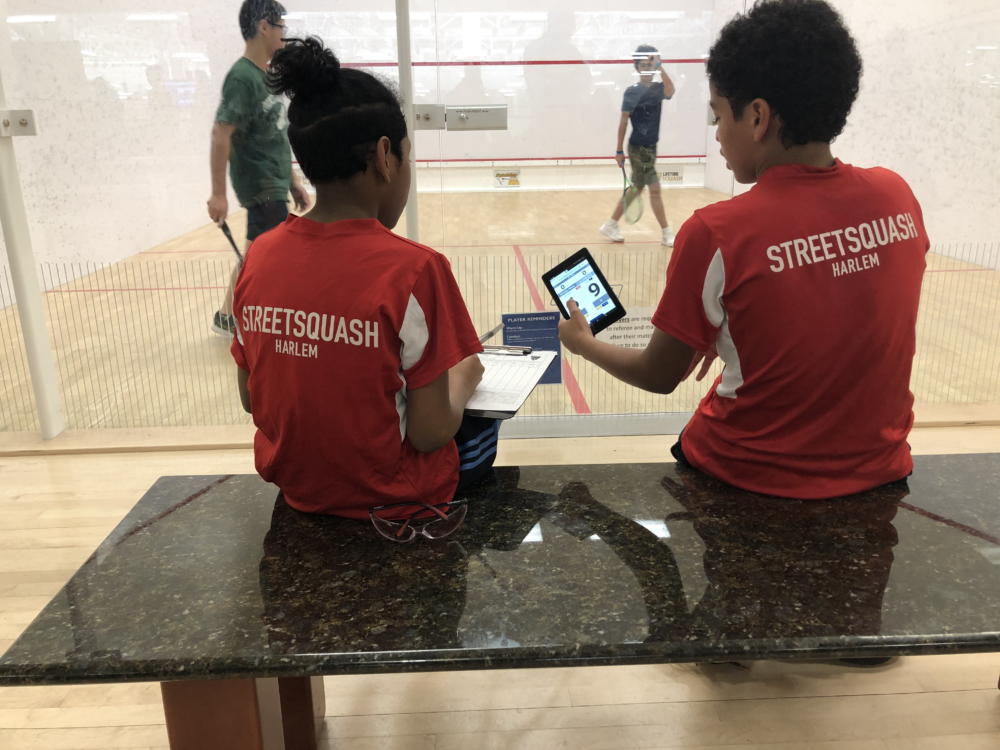 Osiris and Brandon, Class of 2025, keep score and pick up some new squash tips while reffing for other players. 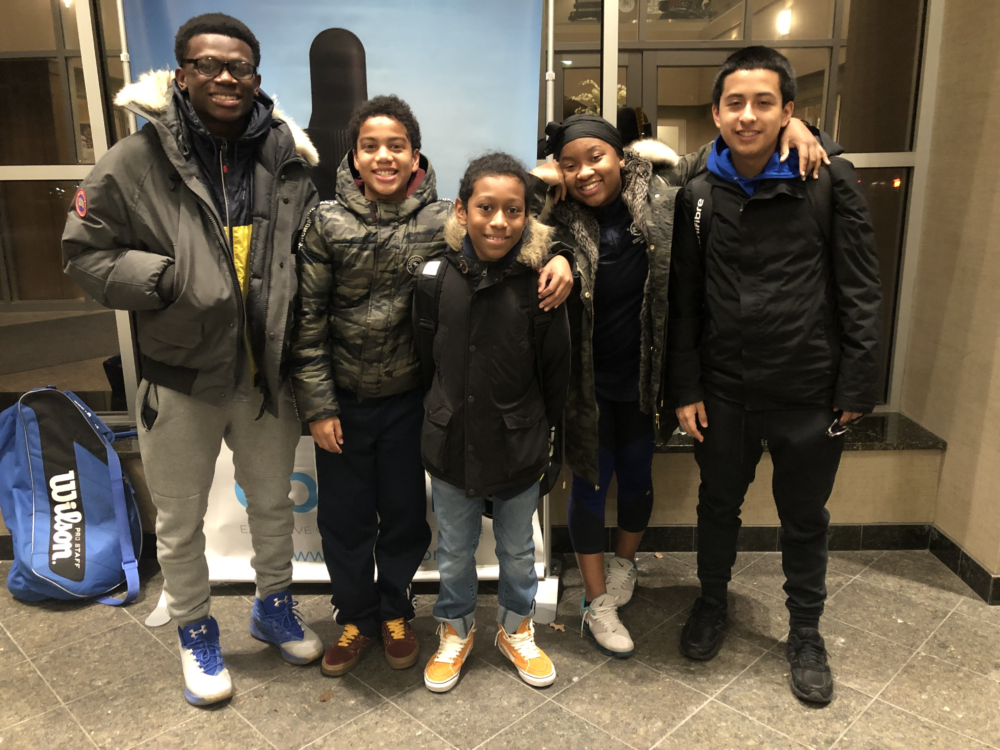 The entire team – exhausted but happy – poses for a group picture before heading home after a fun weekend of competition.

Check back in later this month as our teams gear up for new squash opportunities!