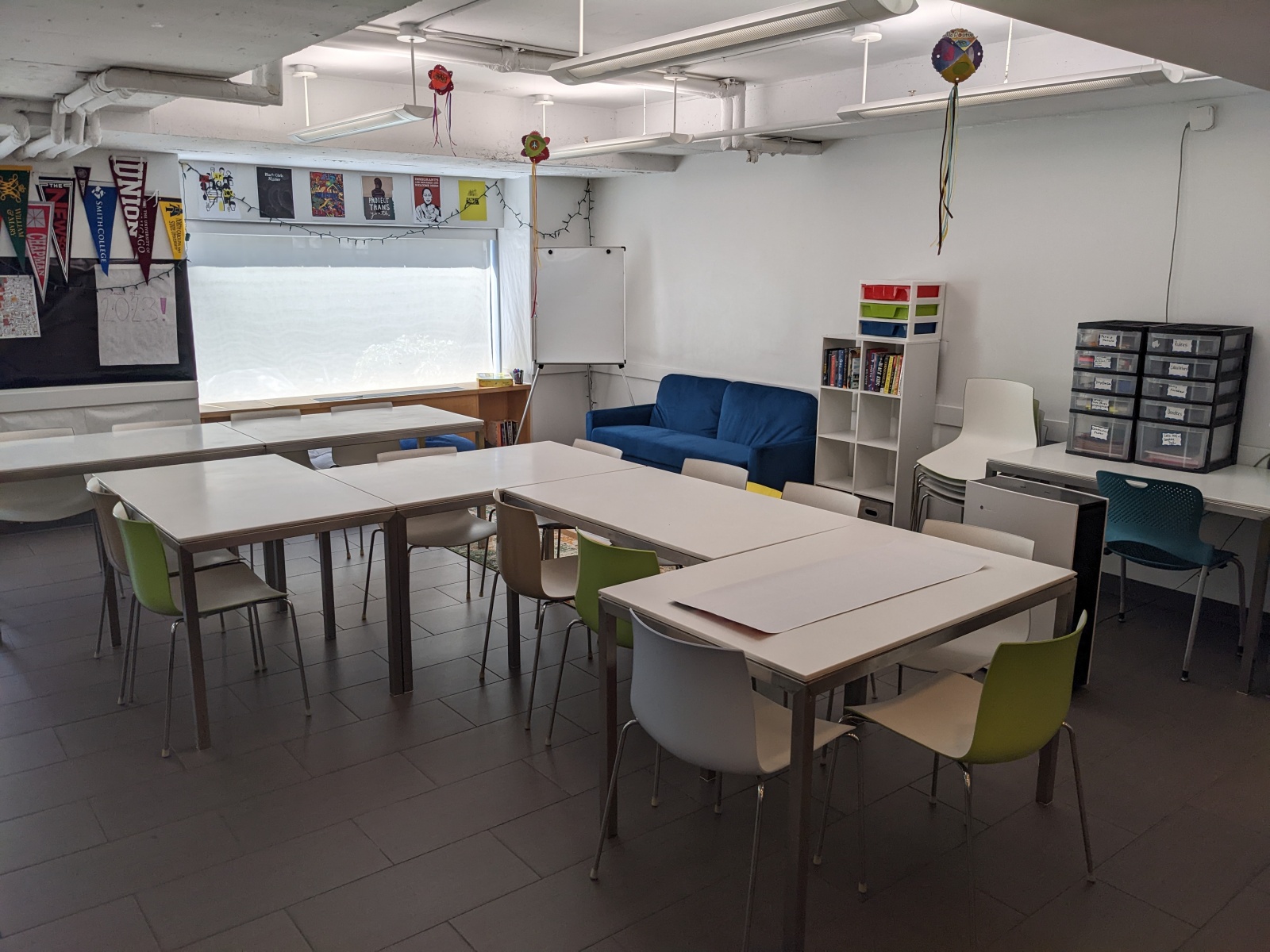 StreetSquash is equal parts squash and equal parts academics, so it’s important to ensure that kids are comfortable in both spaces.

Previously, StreetSquash’s four classrooms featured mostly white walls, white tables, and white chairs. But with a new Academic team at the organization, they set out to change all that.

“These students spent more than a year at home completely comfortable, maybe with their laptop on a couch or on a bed and then coming into an environment and changing that completely,” StreetSquash Program Director Stefany Navarro said. “So for me it was just giving the staff autonomy with creating comfortable spaces.”

Classrooms now feature a variety of different seating arrangements. Students can sit at long tables if they want to be in a large group. They can sit alone or in smaller groups at small round tables. Classrooms are also equipped with couches and bean bag chairs for students who prefer to lounge while doing their work.

And gone are the days of bare white walls. Some have been painted and there are various posters, pictures, and other items adorning the spaces.

Taylor says that Academic Manager Khadijah Brockington is big into color theory and she was the inspiration behind bringing more focus to the walls that already had some color on them.

“She wanted to make sure the space reflected calm energy so we brought in lots of blues and greens and stayed away from harsher colors like red and orange,” Taylor said. “Blue and green are shown to be more serene and help you focus.”

Stefany says the colors bring life to the room, but don’t bombard students with colors that are distracting.

On the walls is a mix of education and art.

“Some of the posters on the walls were created by me and they’re academic tools like PEMDAS,” Taylor said, referring to the order of operations in math.

Then there’s a variety of other posters featuring art that was sitting in storage inside the StreetSquash facility. They represent diversity, inclusion, or advocate for various social injustices.

The classrooms are also age appropriate. The vibe downstairs in room one, is a better fit for middle schoolers. Meanwhile upstairs in rooms 3 and 4, the decorations better reflect the attitudes of high schoolers.

Bulletin boards also hang on the walls with the words “the fridge” written on them. Taylor admits this was an idea she borrowed from an educator online.

“If you have something that you want to show off, whether it be a good grade at school or art that you’re proud of, you can just go pin it on ‘the fridge,’” Taylor said.

Early in the academic year, Taylor says the kids are adapting well to their new classrooms.

“I think the kids really like it,” Taylor said. “They want to be in the spaces more than they’re supposed to be in them so it seems like they’re responding really well.”