Our trip to PA went off without a hitch! Will and I took 15 10th and 11th graders to see colleges and play some squash in central PA. Our trip started with a Friday evening tour of Lafayette College, given by a friend of StreetSquash who is a 2nd year Posse scholar there. Despite the fact that it was already dark out when we arrived, we got a thorough tour of campus. It was rivalry week, and there were lots of alumni on campus for the big Lafayette-Lehigh football game the next day. After the tour, the kids commented that they liked our guide because he was “honest” and “real” about what college has been like so far.
Saturday started with an info session and tour of Ursinus College, which many of the students had never heard of but ended up really liking. Other than passing a group of Ursinus students who mouthed at us “don’t go here!” it was a really positive visit. Our tour ended with lunch at the dining hall, where many students opted for breakfast-for-lunch while others enjoyed the pasta bar.
The students then napped for a while on the way to Franklin & Marshall, where we faced Squash Aces in a friendly match. We were greatly outnumbered, so our bottom 9 players ended up playing twice to make up for it. This was a big highlight of the weekend, as it was Shirley’s and Ivan’s first matches ever, and chronic double-studiers Viviana and Lyrick each played and won two matches! After sharing some fruit with their opponents, StreetSquashers went on a brief tour of campus, led by the Squash Aces program director and her daughter (a freshman at F&M). Like at Lafayette, it was unfortunately dark out, and a cold wind was picking up, so we rushed from one indoor stop to the next and didn’t get to see too much.
We headed to dinner in Harrisburg and then a couple competitive rounds of bowling. It was Ivan’s first time bowling and despite his terrible form he still managed to bowl multiple strikes. I tried to capture Jermaine’s bowling form on video but failed – I can demonstrate for anyone who’s interested.
We made it to the hotel with no time to spare before curfew (phew), so it was straight to bed for everyone. Sunday morning we drove to Dickinson, where we met alumnae Imani and Patricia. We got to see Dickinson’s new squash facility, as well as some academic spaces, the library, and Imani’s dorm room. It was great to hear about their experiences: Imani is still getting into the swing of things as a first-year, while Patricia is looking into what she’s going to do next year after she graduates. Both of them promised to stop by StreetSquash this week when they’re home for break.
Despite some snow during the drive back (and the kids begging me to “drive slower, make lots of stops” and cheering when we hit traffic), we made it back at the reasonable hour of 4:30. All in all, great trip! Thanks Will for co-chaperoning!

PS – this was I believe my 20th College Prep trip! 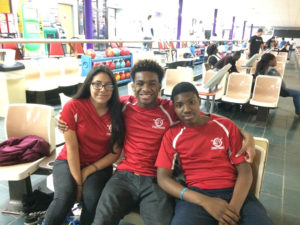 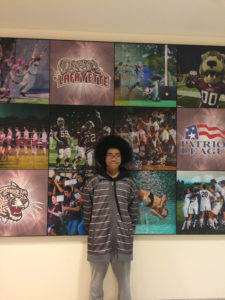