Will and I took 11 juniors to Camp Bernie this weekend, and we had a blast! I left StreetSquash with the early crew at 10 am–right on time– and we even got to camp early. We put our stuff away in our private cabin and headed straight to lunch, where we played some air hockey and ping pong while waiting for our food. The camp had a waiter system where 1 person from every table was in charge of getting all of the materials and the food so the kids were super responsible about helping each other out. Our first meal of quesadillas was delicious and received high praise from all the kids. Then, we moved onto the “playpen,” a ropes course of about 42 feet high, where we did a team belay to help 2 people at a time climb up to the top. Fatou and Leslie A went first, and there was some really sweet teamworrk. Fatou’s long legs allowed her to climb really quickly, so she leaned back and lent a literal hand to Leslie to help pull her up. Heaven was by far the most vocal support system and cheerleader, and gave a ton of great strategies to all the climbers. Almost everybody made it up to the very top of the course. I climbed with Briana, and remembered that my legs turn into jelly when I’m confronted with any sort of height, but she was wildly supportive and helped me get the job done even when my legs weren’t cooperating with my brain. After the playpen, we moved onto canoeing. It was a pretty small lake, so at first it felt a little bit like bumper cars, but then the instructors introduced us to some domination games with tennis balls and we had a lot of fun. Will and Kianna joined us mid-canoe activity, and jumped right into the competition. The instructors loved Heaven’s songs and energy so much, they offered her a job this summer. We then had about an hour to transition to dinner, so we went back to the cabin to change, play some cards, exchange some stories, and then went to eat. We enjoyed chicken cordon bleu and everyone took advantage of the enormous portions available to us.

After dinner, we had an hour of free time, so we played four-square, volleyball, basketball, and a big group game of kickball. At about 8pm, we went back to the cabin to prep for our campfire. We had a fire pit right outside our cabin, where we made s’mores and told ghost stories. We missed our ice cream social since the staff forgot to tell us where and when it was, but the s’mores made up for it. We had a few extra marshmallows for people to get seconds, so Will tested them with some trivia to see who would be the lucky few. Then, we told ghost stories, and as the sun went down, we noticed a bat in the sky and all got a little creeped out.

In the cabin, we played games, put on face masks, exchanged more stories, and fell asleep. The next morning we were up and out of the cabin early and somehow made it to breakfast right on time at 8 am. We enjoyed some french toast and sausage before heading out to archery. There was some friendly competition and far more gnats than everyone was comfortable with, but we had a good time. The next activity was ziplining, where we had to climb up a ladder to transfer to a telephone pole in order to get to a ledge about 45 feet in the air, where we would drop for the zipline. A couple people weren’t interested in the climb, either because of fatigue or a fear of heights, but everybody else made it up there very quickly. The zipline required everybody to throw themselves off the ledge, which looked very scary, so some people sat up there much longer than others, but with some encouragement from the team, everybody made it down. They had to be removed from the zipline with another ladder at the far end of the rope so it was a lot of work for everybody, but a ton of fun. After ziplining, we enjoyed some pizza at lunch, and headed home. Despite some traffic, it was a seamless trip.

Highlights from the trip: 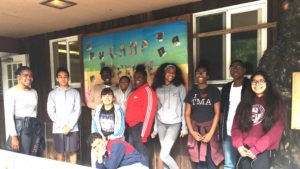 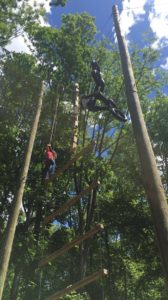 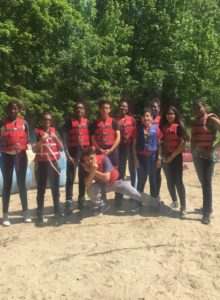