This past weekend, Madeleine, Katiria, and I took 23 8th graders to Ramapo Retreat in Rhineback, NY. Almost all the students showed up before we asked them to, which allowed us to leave on time. After the hour and a half trek, we arrived at Ramapo and were greeted by our staff, Tricia, Dottie, Lyel, and YaYa. They showed us to our cabin and once settled in, we began our first activity of knee tag then an intense game of rock-paper-scissors shoot tournament.Afterwards, we broke off into 2 groups and did some team building activities.

After lunch, we were walked into the woods to participate in the low ropes course. These involved moving a team from one end to the other without touching the ground, getting everyone to stand on a seesaw, and arranging students based on birthday while standing on a log without talking. The students did get frustrated when they couldn’t complete a task, but after some reflection they understand the benefits of talking calmly and working as a team.

Once both groups finished the low ropes course, we all walked to the high ropes course. The students were broken up into 3 groups and placed around the “Sunshine Tower.” In each group there was a climber, a belay team of 3, an anchor (who held onto the staff), and a backup rope holder. One by one each student attempted to conquer the 100 foot tower. Some champions included: Brandon, Elijah, Malachi, Michele, Jessica, Conner, Promise, Raya, and Maimouna. For those that were not able to get to the top, they tried hard and were cheered on by everyone else.

After about 2 hours of this, we headed back to the cabin for somedown time before dinner. Attempting to squeeze in a quick nap, I was woken up by the sounds of pillows hitting everyone. Almost all the students engaged in an intense 10 minute long pillow fight in the communal area. After dinner, we headed to the playground for an hour of free play in which the students rotated playing basketball, kickball, soccer, mini golf (yes, they had a mini golf course), and playing on the swings. Next, we were directed to our fire pit spot where they set up a s’mores table, and a fun song game ensued. After the game and filling up on s’mores we headed back to the cabin for bed time. Luckily, the students were exhausted from the activity filled day, and went right to sleep.

The next morning we had an early 7:15am wake up. After breakfast and clean up, we went on a hike through the woods, which the kids did not enjoy until they each found a good walking stick. We ended the trip with a quick wrap up activity and then said our goodbyes.

Overall, it was a great trip and all of the kids were engaged for all the activities! During the wrap-up activity, the students said they feel closer with each other and were happy to go on the trip. A big shout out to Katiria and Madeleine for having great attitudes during the entire trip and thank you to Madeleine for driving!

Highs: student engagement during the entire trip, Promise being named leader from her teammates, students cheering on each other, students who don’t talk actually talking, Bryan eating his first s’more, and students not expecting to complete the Sunshine Tower, but going really far.
​ 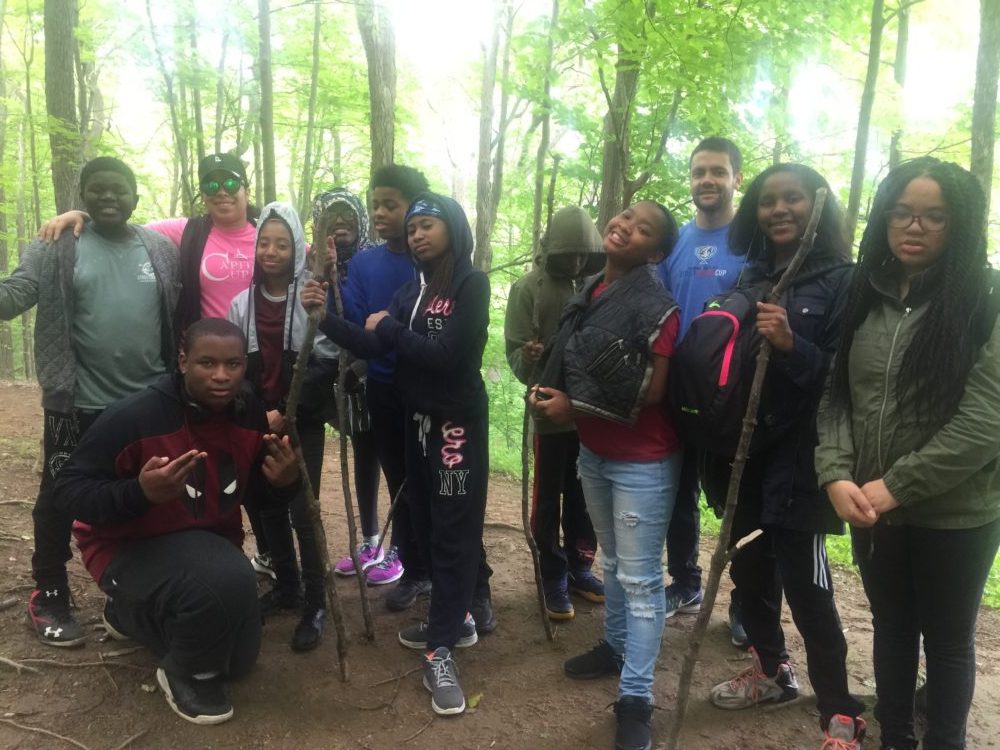 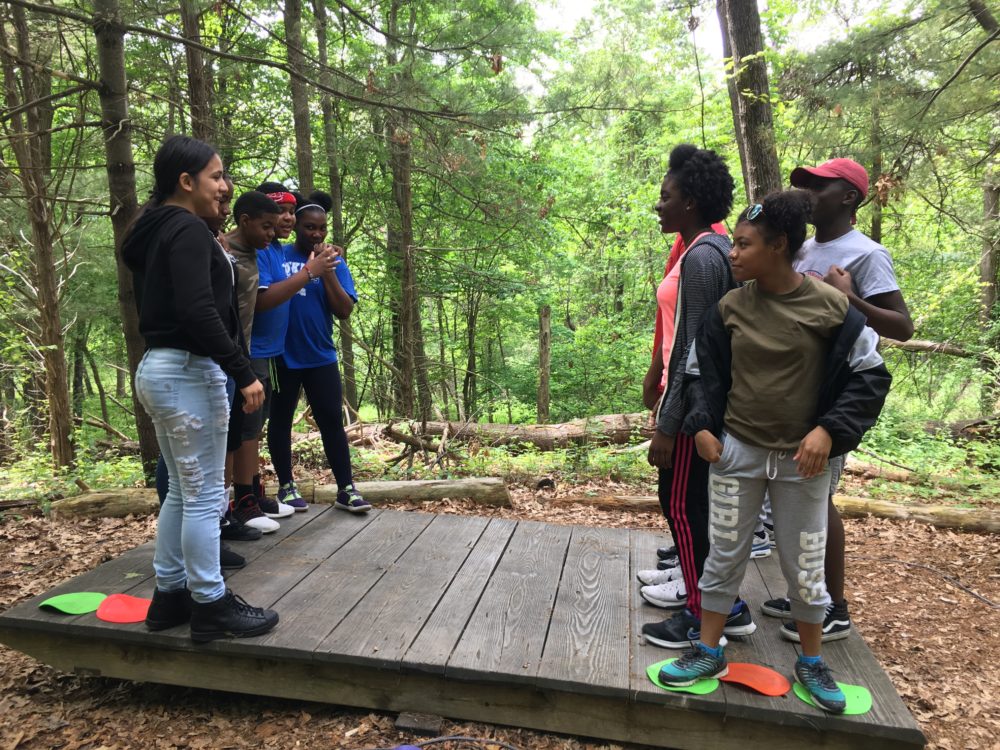 A group of 8th graders attempting to balance on a seesaw without touching the ground. 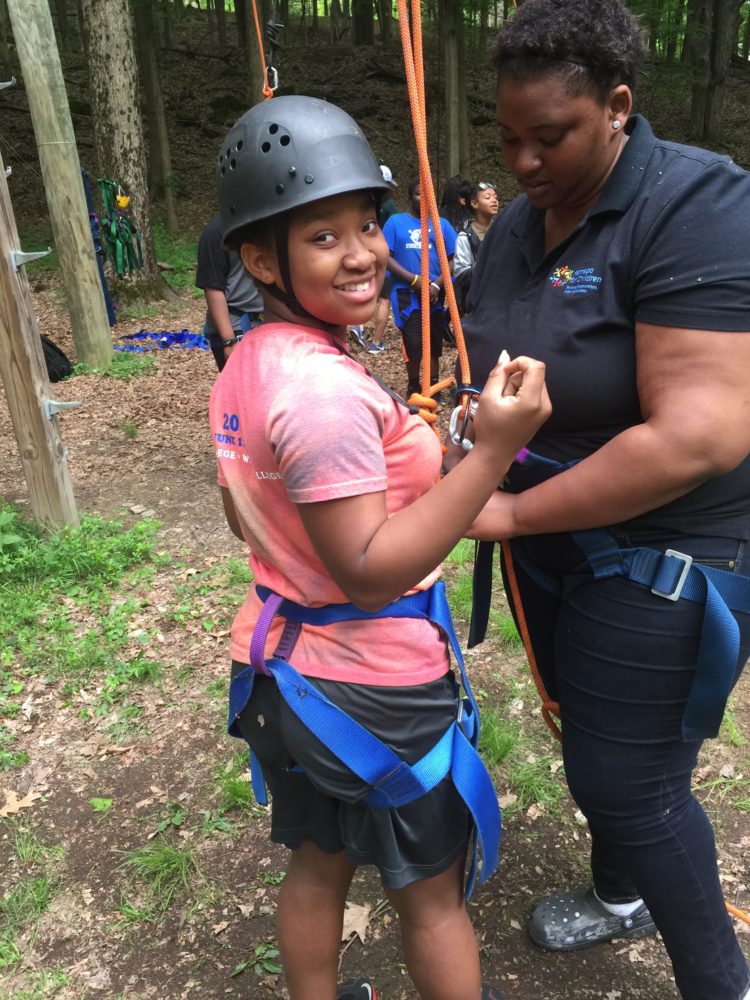 Promise ’21 was nominated as “team leader” from her teammates over the weekend. 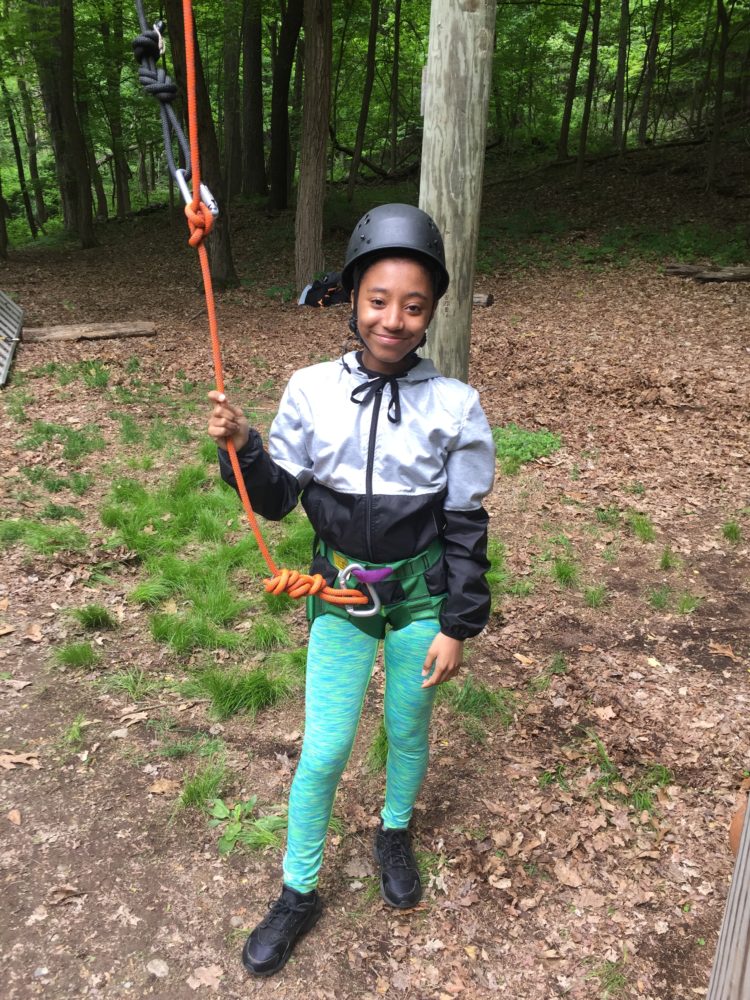 Michelle ’21 strikes a pose before tackling the high ropes course up above.