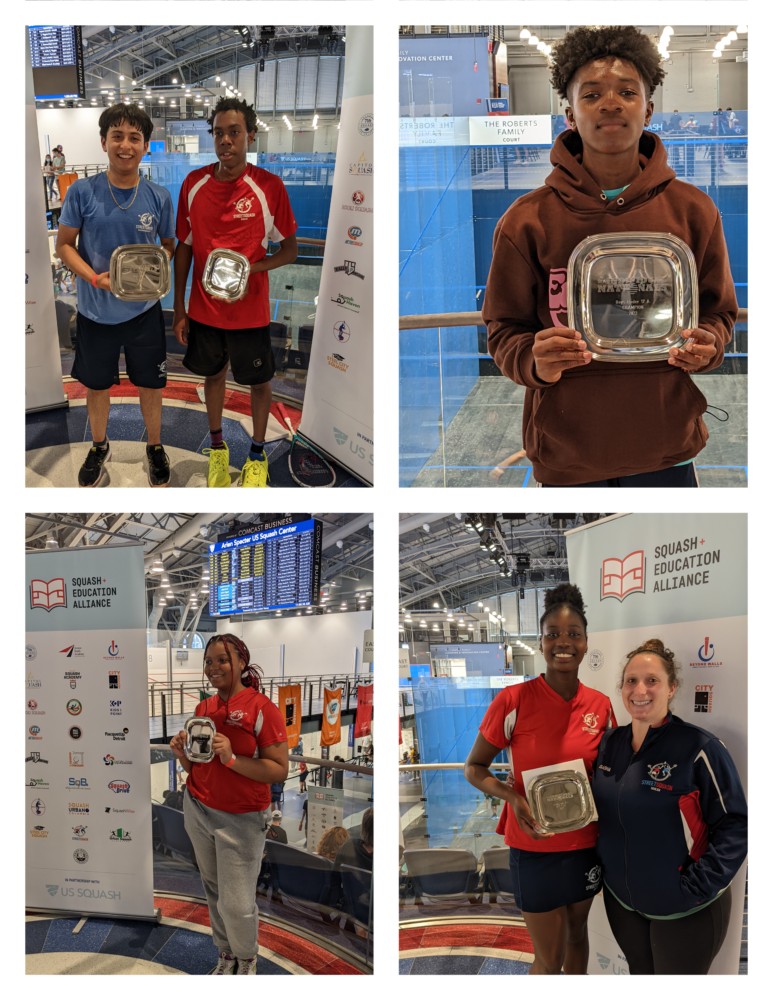 Perhaps the best draw for StreetSquash was in the BU 19 A division, where two StreetSquashers ultimately made it to the finals. Matthew A. and Conner R. went head-to-head to secure first and second place, with Matthew A. coming out on top.

“This is a tournament that I’ve always wanted to win, so when I won it, it was a nice feeling,” Matthew A. said.

Matthew A. secured a first round bye, and then managed to sweep all three of his prior matches leading up to the final. Teammate Conner R., was the first individual in the tournament to win a game off Matthew A. But Matthew still won the match in four games over Conner.

“It was pretty nerve-wracking,” Matthew A. added of playing in the finals. “But we play each other a lot so I wasn’t too nervous, but still a bit nervous.”

But although Conner lost to his teammate in the finals, he did have an opportunity to defeat another StreetSquasher in the semis. Conner swept his first two matches of the weekend before going four games against fellow StreetSquasher Kelvin R. in the semifinals. 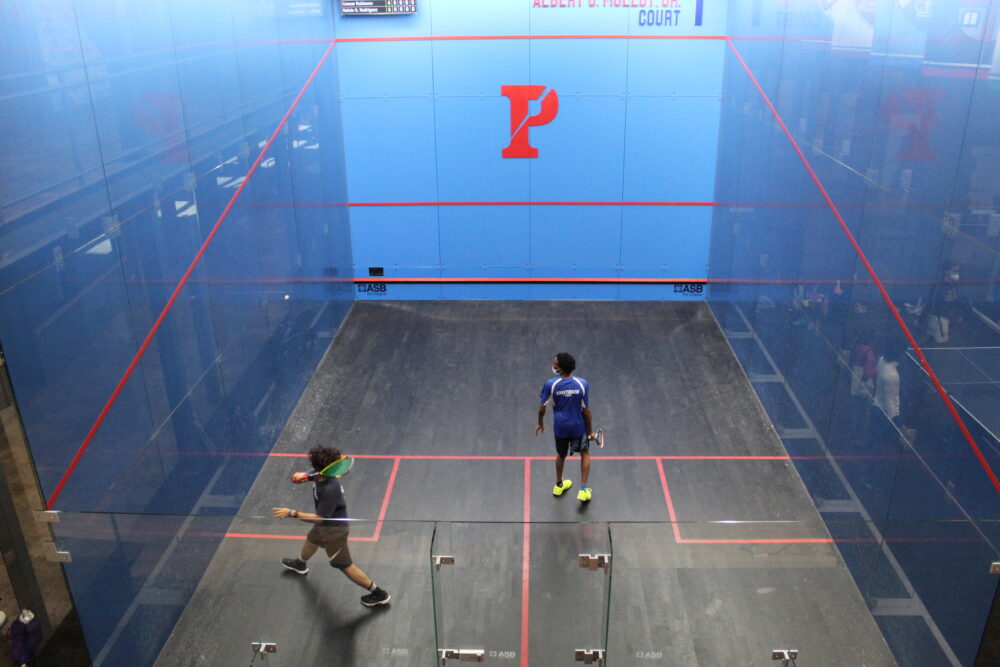 “Kelvin R. was a warrior out there until the body shut down,” Chief Squash Officer Simba Muhwati said. “But he took himself to the limit which is all you can ever want for a kid. Take yourself to the limit and see what you learn about yourself on the journey.”

In the finals, Conner R. and Matthew A. showed why they were the top two competitors in the tournament. And in a very feel-good moment following the end of the match, Matthew gave Conner R. a gigantic hug that lasted approximately eight seconds.

“We respect each other so much as players,” Matthew A. said of the hug. “We just always see each other as opponents and players and teammates so it was really good to share that experience with him.”

“It was heartwarming,” Conner said. “It was cool.”

“It was very emotional,” Sanchez said. “It’s two of our best players that we’ve produced in StreetSquash history. To have them hug it out like that on the glass court at the Specter Center was just a great way for Matthew A. to end his StreetSquash career with us. It was a very beautiful moment.”

“That’s an emotional moment,” Muhwati added regarding the hug. “There’s a lot of respect there. They play each other a lot here. They’re pretty close. Squash is weird. Once you’re playing you’re trying to inflict a little bit of discomfort into your opponent, and it’s hard to do it to your friend. And so I think that was a way of just saying well played, I respect your grind, I still love you. So it was pretty emotional to watch.”

Meanwhile in the BU 17 A tournament, Matthew D. was dominant on his way to a first place finish. He swept his first three matches of the tournament, only allowing his opponents to score more than 4 points in two of the nine games he played ahead of the finals. In the finals match, he quickly took the first two games before suffering a minor achilles injury in game three.

“I went for a ball and the court was slippery where I lunged and I kind of over-slid,” Matthew D. said. “My achilles jammed so that kind of hurt a little bit.”

But medical staff deemed him good to go. He finished out game three in defeat, but came back out in game four to secure the finals win.

“I was kind of in a slump until I got to the semifinals where I kind of felt like myself,” Matthew D. said. I had a lot of fun playing matches and being in a hotel and that kind of stuff. It was a lot of fun.” 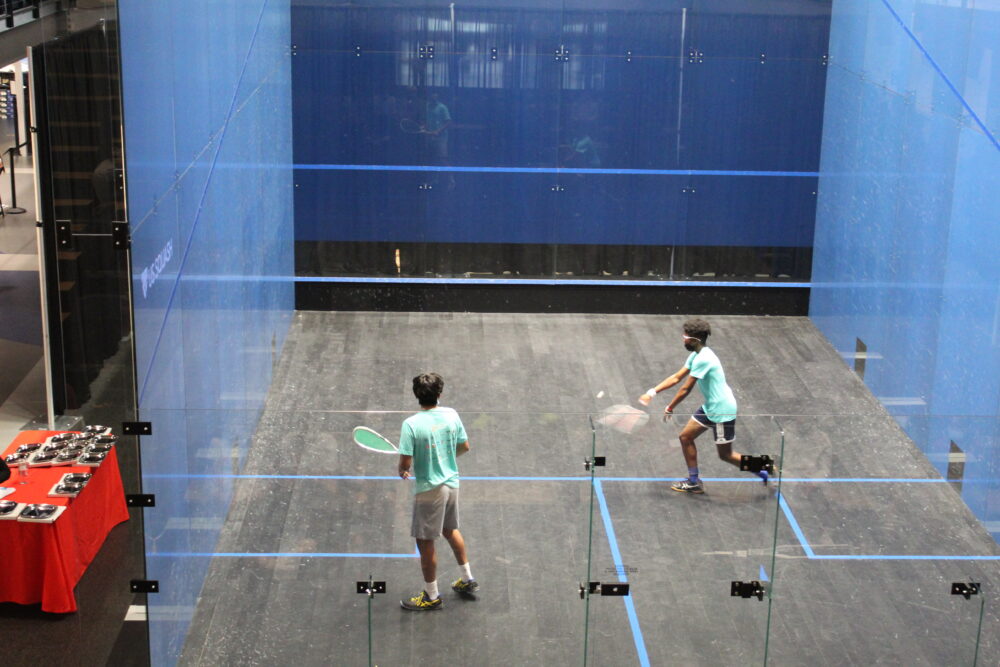 Regarding the win, Matthew D. appreciated all the support.

“I liked it a lot,” Matthew D. said. “A lot of people came to watch. It was a good atmosphere.”

In the BU 15 A division, Thomas O. also played the minimum amount of games necessary to get to the finals. He swept his first three matches played on Friday and Saturday. On Sunday, he went up against a fierce opponent from CitySquash. Thomas faced an opponent ranked in the top 90 of all junior players in the BU 15 division. Thomas kept the first two games close but ultimately got swept en route to a second place finish. 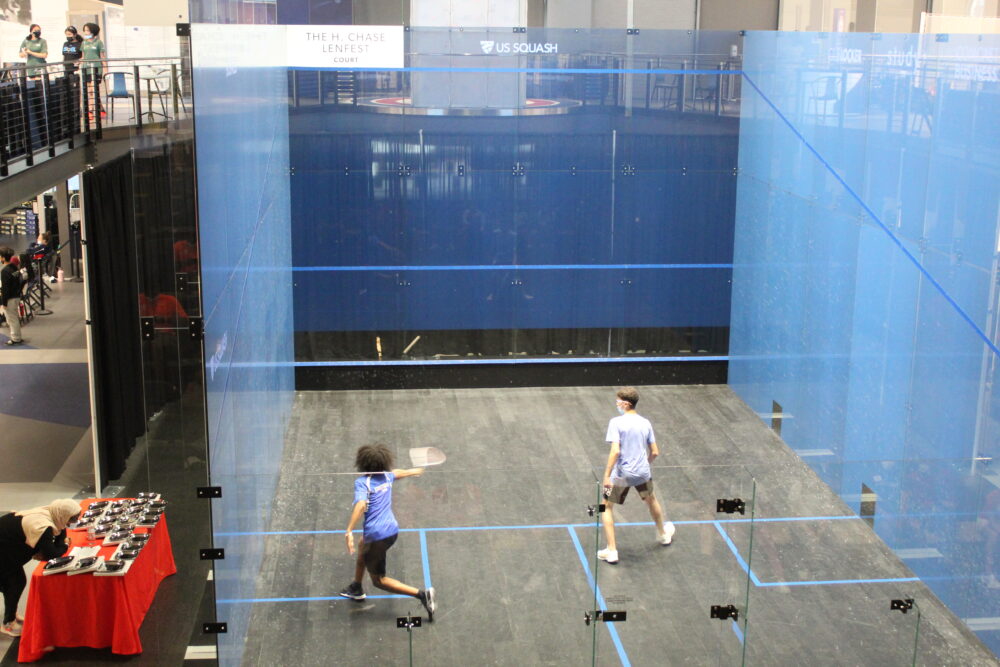 “It was my first time playing on a glass court,” Thomas said. “I’m not used to it but I started to develop and did pretty good overall. Next time I’m gonna aim for first place but right now I’m just gonna keep on working.”

“Thomas has worked really hard and changed his entire technique,” Muhwati said. Credit to the support we’ve gotten with his SEA HPT (Squash and Education Alliance High Performance Team) money and his coach Felipe Pantle. He was so different technically this tournament. It made a massive difference.”

“He played against a player that I think was just a little too good for him,” Muhwait added. “One of the few exceptional players at this event. I hope that he uses it to incentivize his drive to get better in the future.”

“He is one that is eager to work hard,” Sanchez said of Thomas O. “He wants it badly so when you have somebody like that, progress is just naturally gonna come.”

For the girls, Sienna M. was the top finisher coming in second place in the GU 17 B division. Sienna M. swept her first two matches prior to winning a four game match in the semifinals. In the finals, Sienna M. kept all three games competitive but ultimately came away with second place. 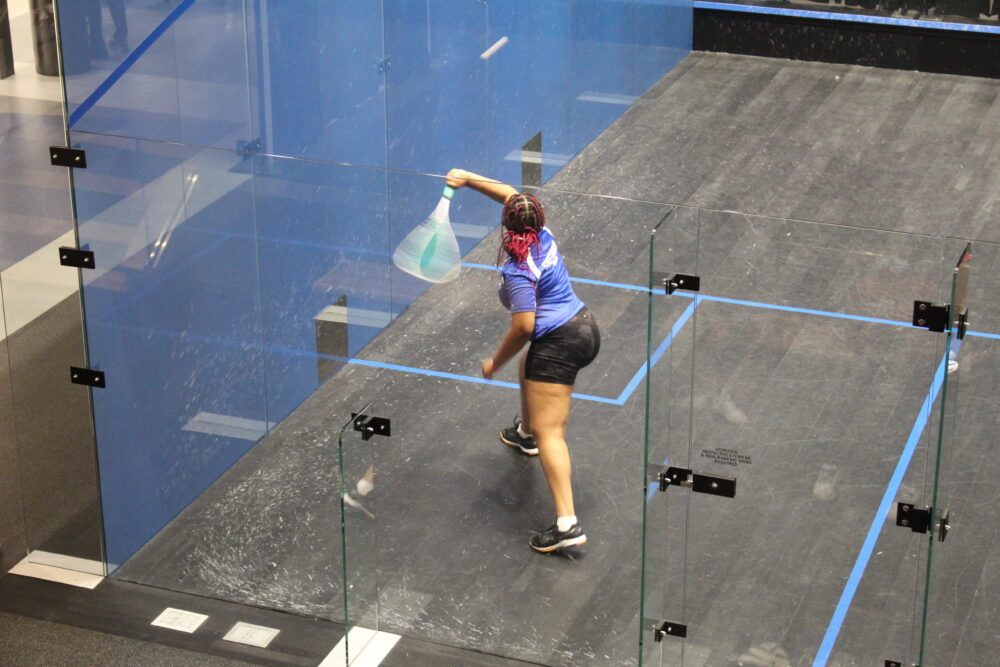 Sienna during her finals match at SEA Individual Nationals

“I’m happy for Sienna M., it was a good experience for her,” Muhwati said. “A lot of wins in that section she was playing in, and she tried as hard as she could. In the last match she played on the glass court for the first time. It’s a very different court, a very dead court. You need to move up more and make a transition. But by the time she had made that transition, she ran out of points and had lost the match.”

Meanwhile, Habi S. battled all weekend long en route to third place in the GU 19 A division. She won her first match in four games and her second match in five. She then lost a hard fought five game matchup in the semifinals. But in the quest for third place, she competed in another five game match, this time coming out on top and bringing a trophy back to Harlem. 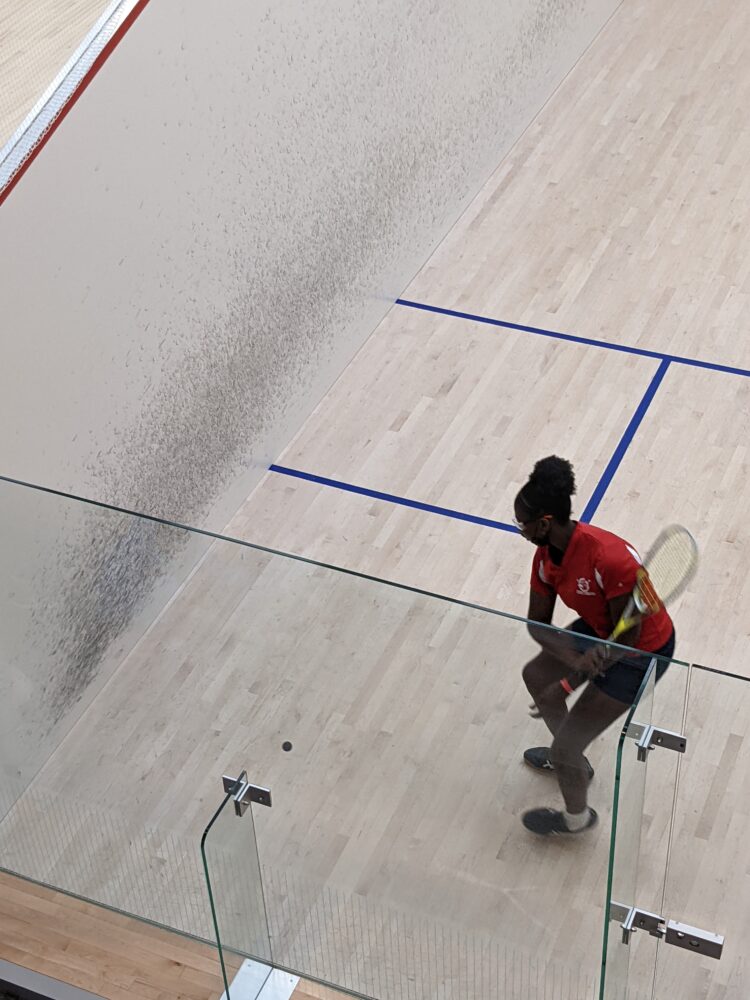 Habi S during a match at SEA Individual Nationals

“I thought that semifinal was a tough match for her,” Sanchez said. “She ran out of gas a little bit. No matter how good your technique is, you have to be able to keep up. I think she just got tired and just lost to fatigue.”

For all the seniors, this was the final tournament they’ll play in as part of the StreetSquash program.

“It was a great way to end six years of squash,” Matthew A. said. “I just feel great.”

“It was a pleasure being able to work with them these past six years,” Sanchez said of the seniors. “Sweat, blood, tears, happy moments, sad moments, frustrated moments. But I think that’s what being an athlete is all about. That’s what playing a sport and in particular this sport is all about. It’s been a pleasure watching their growth on and off the court, in their lives.” 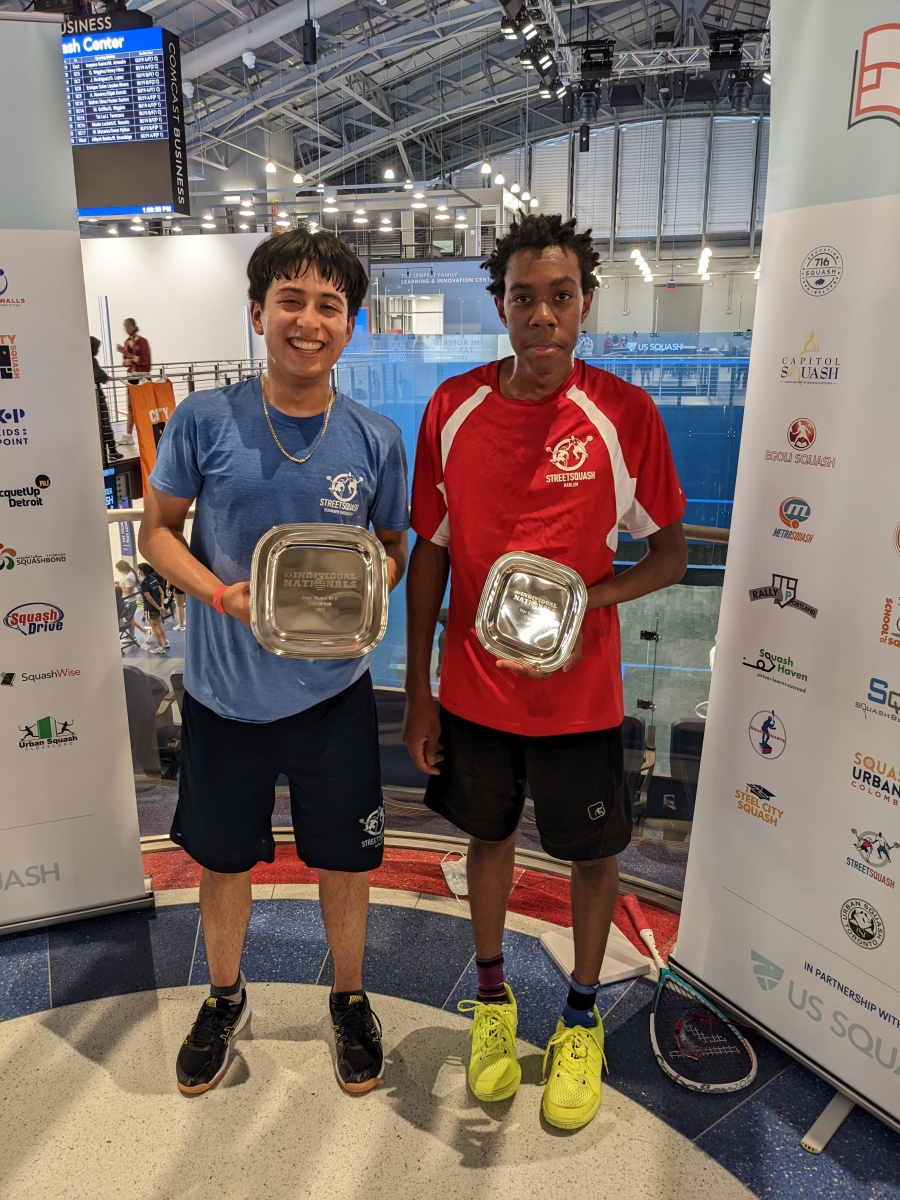