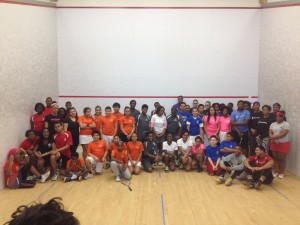 On Saturday, March 14, ten students piled into a van and drove the New Jersey Turnpike to Urban Mid-Atlantic Individuals at SquashSmart’s Lenfest Center in North Philadelphia. Although the drive was delayed by a few faulty alarm clocks, the commute was smooth and the music loud, as the kids prepared themselves mentally for a day of competitive matches.

With only a few minutes separating our eager StreetSquashers from the courts, the navigation system sent the van into Hunting Park where it was obstructed at North 10th and Luzerne Street by a closed gate. The added eight minutes of commute frustrated everyone in the van, and the StreetSquashers volunteered to walk the one block to the Lenfest Center, such was their keenness to play.

Thanks to a wonderful tournament director – shoutout to Sakora – the matches ran smoothly, and StreetSquashers kicked right into gear. Some competing for the first time showed nerves but were determined to overcome them and play to the best of their ability. A few notable results from the tournament: Fatou ”18 winning second place and Harriet ’18 winning 3rd place in the GU15 draw and Emma ’16 winning three out of her four matches in her round robin.

With a successful day of competitive squash behind them, the StreetSquashers again hopped in the van to tailgate back to New York with the CitySquash van. Of course, this was not before stopping for a quick bite – as five hours had elapsed since lunch, students’ blood sugar was noticeably low. With a full stomach the ride back was much quieter and the students caught up on their sleep with a small siesta.