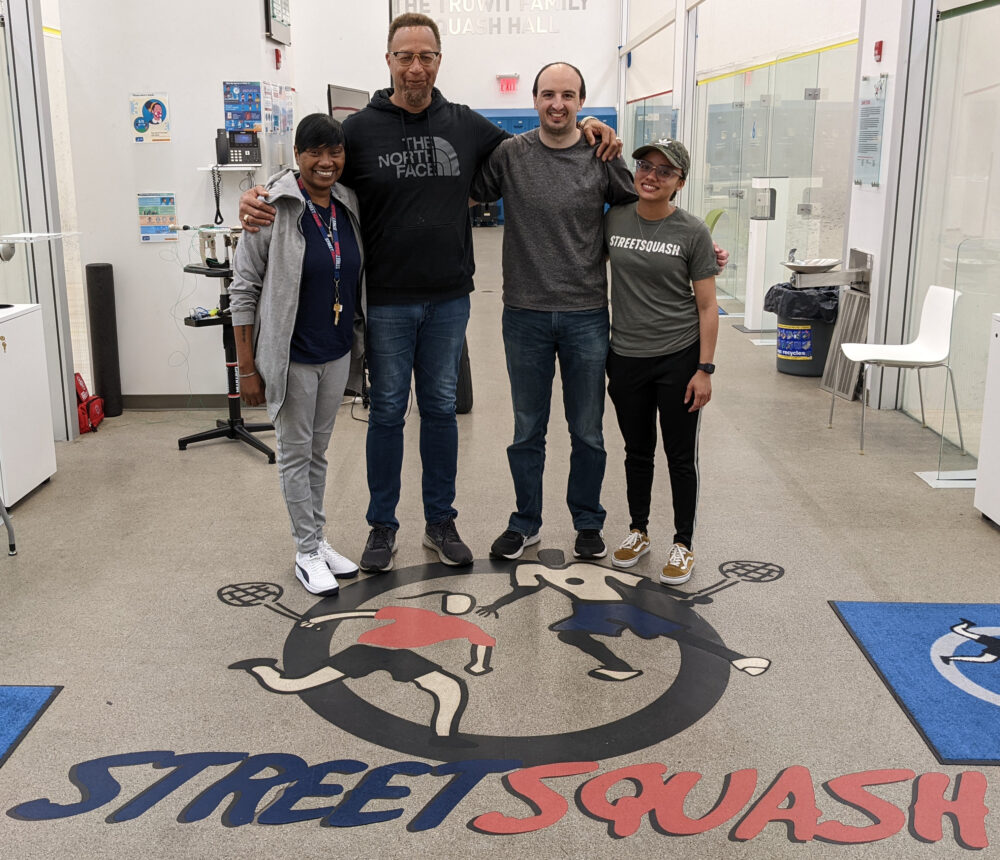 StreetSquash has brought on new staff members in recent months as the organization continues to thrive following the height of COVID-19.

Back in December, we hired a CASAS Manager, Robert Earl, who oversees our College Access, Support, and Alumni Success Department. Two additional members have been hired to work under Robert – Olivia Nieves and Wilhelmina Brown.

In addition, the organization hired a new Manager of Communications, Mark Wishnia.

More staff members are set to come onboard with an Academic Manager beginning in June, and a Deputy Director, Dennis Wall, starting right after Memorial Day. The hiring process is under way for a Social Worker and a Squash Coordinator.

Robert Earl provides strategic planning to prepare students for college as well as for internships and jobs beyond that. He plays an integral role in staying in touch with students while in college and making sure they remain on track and are doing the right things in order to achieve their goals.

“The organization’s commitment to supporting students in their academic and career growth attracted me to the organization,” Earl said.

Earl was born in Buffalo, New York and has two Master’s Degrees – one in Student Personnel Administration in Higher Education and another in Divinity. Earl has a Bachelor of Science in African American studies. He was also a member of the University at Buffalo basketball team while in college.

In addition to his role at StreetSquash, Earl also serves as a pastor.

In his free time, Earl likes spending time with family and friends.

Olivia Nieves is the College Access and Transition coordinator. She started working for StreetSquash in October of 2021. She helps prepare high school seniors for life after graduation whether they opt for college or not.

Nieves grew up in the South part of the Bronx and did all her primary and secondary schooling there. She received her Bachelor’s degree from SUNY Purchase with a major in Sociology and minor in Psychology. She also studied abroad in Africa for one summer. She went on to earn a Master’s in School Counseling from Hunter College.

Nieves says she found out about StreetSquash on idealist.org.

“I was attracted to the organization because it was an afterschool youth program focused on supporting students and families in the community’s needs,” Nieves said. “It felt more than just an afterschool program because students are involved from 6-12th grade and I wanted to be a part of that support system.”

In her free time, Nieves enjoys traveling, trying new foods, spending time with her family and walking her dog. She also started her own business on the side in January of 2022 called DayDream Living. And if you see someone on the street who looks similar to Nieves, it might be her fraternal twin!

Wilhelmina Brown is StreetSquash’s Career Development Coordinator, assisting students on taking the right steps to have success in the careers they want to pursue. She also helps students find careers they may be interested in if they’re not too sure what they want to do. Brown started at StreetSquash in April of 2022.

Brown knows what it takes to stand out in a crowd. She was born and raised in New Jersey and is one of 11 children. She moved to New York in 1985 after graduating high school and has been in the Big Apple ever since. She earned a Bachelor’s from The City College of New York in Interdisciplinary Sciences with a minor in Psychology. She then achieved a Master’s in Labor Studies at the CUNY Graduate Center.

Brown comes to StreetSquash with a diverse professional background. She served as assistant faculty at the City College of New York teaching psychology courses. She’s also served as a panelist on psychology symposiums for the school.

She spent five years as a corrections officer in New York City before spending 18 years in Corporate Communications for the MTA. Immediately prior to joining StreetSquash she worked in adult education, with veterans, and in a rehabilitation center. But after finding out about StreetSquash, she knew it was her calling.

“It has always been a desire of mine to come back and use my education and experience to help young people to prevent them from becoming the adult population that I have the most experience in serving,” Brown said.

In her free time, Brown loves traveling and trying new things. She also enjoys nature and takes advantage of it by frequently hiking and going to the beach.

Wishnia grew up on Long Island and graduated from Jericho High School. He went on to get a Bachelor’s degree from Penn State University, majoring in Broadcast Journalism and minoring in Sociology.

He spent a decade in the broadcast industry and has worked all over the country in various capacities. He began as a radio producer on a news/talk station in Davenport, Iowa before becoming the Assignment Editor of Davenport’s NBC TV affiliate. From there, he went on to work as a morning radio DJ on a radio station in the small town of Malone in upstate New York. He continued his on-air journey in Bismarck, North Dakota on another classic hits radio station there.

In 2018, Wishnia moved back to his home state of New York where he held stints at WFAN radio and CBS Sports, before spending three years at CBS News Radio as a writer and producer.

When Wishnia found out about StreetSquash through job postings on Indeed and Linkedin, he knew immediately that he wanted to work there.

“I’ve been fortunate throughout my life to have so many mentors and opportunities, and I’ve always wanted to be in a place that can help other students out,” Wishnia said. “When I saw what StreetSquash was all about, I thought it was so cool and felt I needed to be part of it.”

StreetSquash is proud to welcome these new staff members to the team and looks forward to adding a variety of new individuals who believe in, and want to forward the organization’s mission.